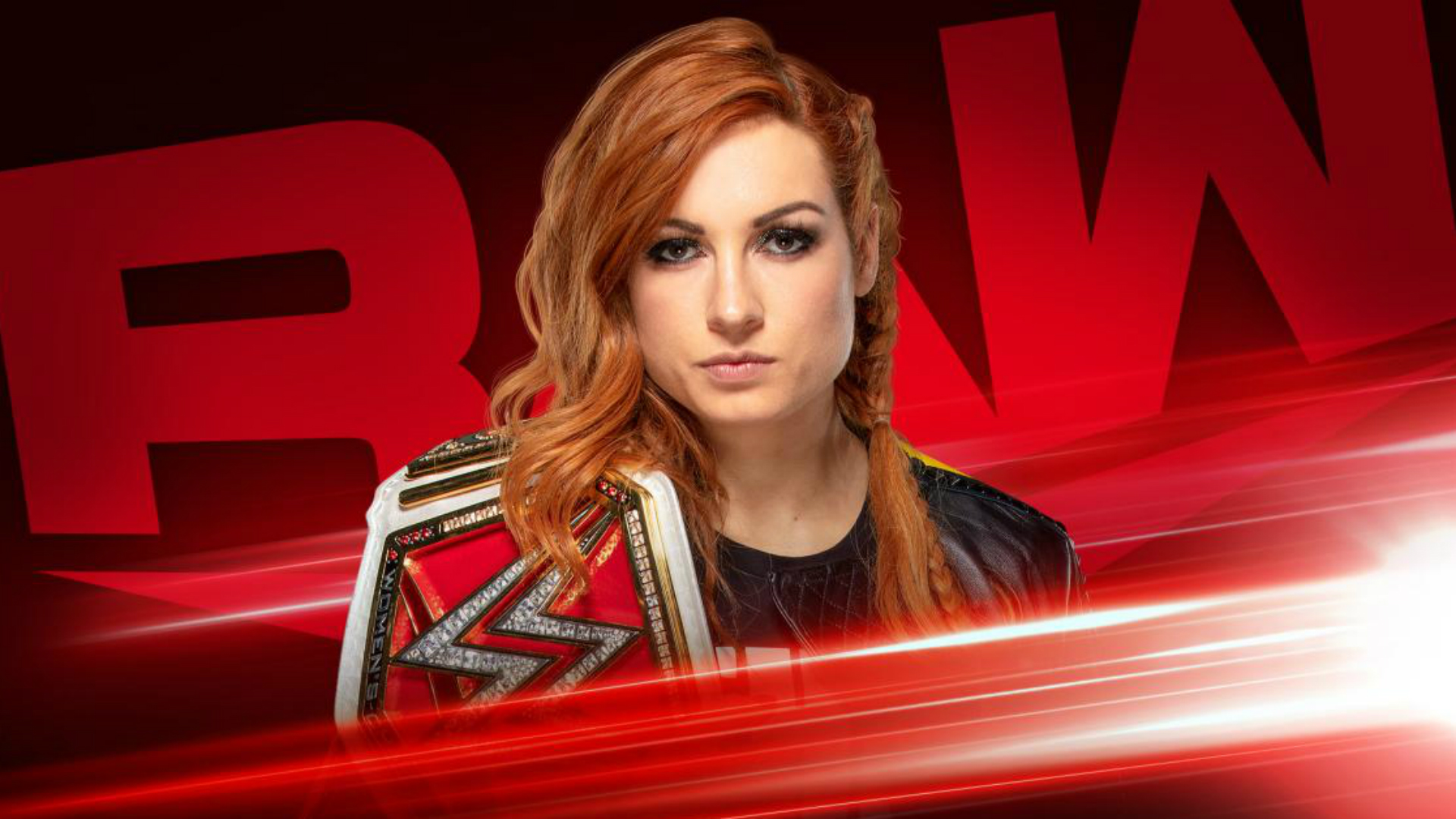 It hasn’t been a normal road to Wrestlemania 36 on Saturday and Sunday from the WWE Performance Center in Orlando. The show has seen it’s fair share of twists and turns due to the coronavirus pandemic, which kept crowds away. WWE has attempted to make the best out of a bad situation by holding empty-arena shows.

The final edition of Monday Night Raw was just that as only three matches aired and was heavily focused on promos leading into an event which has been dubbed “Too Big For Just One Night”.

Raw featured excellent microphone work from The Undertaker to promote his Boneyard match against AJ Styles, Edge to preview his bout with Randy Orton in a last man standing match and the best of the night by Paul Heyman along his client Brock Lesnar, who faces Drew McIntyre for the WWE championship.

Here is what happened on the go-home WWE Monday Night Raw before Wrestlemania 36.

11:02 p.m.: Heyman says Lesnar’s plowed through The Undertaker, The Rock, John Cena, Randy Couture and Shane Carwin. He says if McIntryre can hit the Claymore Kick on Lesnar, the world will find out if it can take out his client. Heyman tells the world that he guarantees that on the go home show in the final segement ahead of next year’s Wrestlemania will feature Brock Lesnar.

A strong final promo from Heyman. What made it special was the fact when the show came back from the commercial break, Lesnar was in front and Heyman was in the back and the camera would switch back-and-forth. It’s hard to top a Paul Heyman as he’s arguably the best in pro wrestling. The only thing missing was McIntryre but still a job well done.

10:54 p.m.: Brock Lesnar along with Paul Heyman are in the ring for the final segment of the show.

10:50 p.m.: As the announcers Tom Phillips and Byron Saxton are running through Wrestlemania card, WWE is still promoting Goldberg vs. Roman Reigns for the Universal title even though Reigns revealed earlier Monday he won’t be wrestling on the show.

10:24 p.m.: Raw is now reairing Brock Lesnar’s WWE title match against Rey Mysterio from Survivor Series in November. A weird one to air but in turn makes sense for the beating Lesnar gave him.

10:21 p.m.: NXT Women’s champion Rhea Ripley was walking into the Performance Center when her opponent at Wrestlemania, Charlotte Flair attacked her from behind and into the gated entrance. She told Ripley that she better be ready for their match at Wrestlemania.

10:16 p.m.: Carter got in a little bit of offense, connecting on a springboard dropkick followed by a rollup for a two-count. The good vibes didn’t last long for Carter as Asuka hit a thunderous German suplex and then the Asuka lock for the submission win.

If there’s a female wrestler better than Asuka, I’d like to meet her.

10:00 p.m.: After showing a highlight package of what led to his upcoming last man standing match at Wrestlemania 36 against Randy Orton, Edge is in the backstage area to promote their matchup. He says grit Orton is ok with just being ok. That’s not what the word means to him. He says it’s forging your own Hall of Fame career, returning from a nine-year hiatus and ending his career on his own terms.

Edge claims he makes Orton better and gets the passion out of him like no one else. The former WWE champion says he thought his return at the Royal Rumble would be the last moment for him but harming his wife and mentioning his kids drew him back. He says he will push Orton so far down that he won’t be able to ever get up.

What a bone chilling promo from Edge. I had goosebumps down my arm. If you watch Wrestlemania, this is the match to watch and the interactions have been minimal and been mainly built from Edge and Orton’s work on the stick.

9:45 p.m.: Raw comes back from commercial with Owens sitting in the ring. He says he thought a lot about the promo Rollins gave last week about saying he was the one who helped build the Performance Center. Owens claims that isn’t the case and Rollins is delusional and a dips–t. Even though he isn’t had Wrestlemania moments like Rollins, Owens says he’s accomplished as much as him in becoming an Intercontinental, United States and Universal champion.

Owens says their pasts don’t matter and come Wrestlemania on Saturday that he’ll show Rollins isn’t a God and will beat him and get his Wrestlemania moment.

A passionate promo from Owens. The microphone work from a lot of talent has been fantastic and this continued that streak.

9:40 p.m.: Owens wins the match after hitting a Stone Cold Stunner on Angel Garza. Afterwards, Rollins rushed back inside the ring and Curb Stomped Owens. The in-ring action was fine but notable for the aftermath. Owens and Rollins mesh well together and it’s been a good leadup to Wrestlemania.

9:22 p.m.: Right now on Raw, Kevin Owens and the Raw tag team champions The Street Profits take on Seth Rollins, Angel Garza and Austin Theory, who replaces Andrade. The United States champion suffered a rib injury and is out indefinitely.

9:13 p.m.: After playing mind games and sitting inside the ring for a few moments, Black hits a Black Mask to win the match. Just a strange bout. It’s hard to get into these when you know there’s no fans.

9:01 p.m.:  Lynch wins to become the Raw and Smackdown Women’s champion with the awkward pin on Rousey, whose shoulders weren’t on the mat. Then the peculiar reset back to Lynch on the stage.

She says Baszler’s demon is her good friend Rousey and a win would break her out of Rousey’s shadow and loss sends behind it once again. Baszler comes up from behind and puts Lynch in a rear naked choke. She proceeds to pick Lynch up and slam her head into the announce table, and looks at the Raw Women’s title.

The segment was well done but it’s so hard to get any interest without any fans to cheer or boo.

8:45 p.m.: These commercials breaks when the classic matches are airing are getting to be a bit much. The action is picking up and it’s time for a commercial.

8:17 p.m.: Lynch begins to cut a promo about facing Shayna Baszler at Wrestlemania 36 and says it’s been a crazy year since Wrestlemania 35. Then in an odd sequence, Lynch cuts to the main event of Wrestlemania between herself, Ronda Rousey and Charlotte Flair.

8:14 p.m.: Becky Lynch is out next. It’s just weird that she’s holding the Raw Women’s title in the air for nobody.

8:11 p.m.: A really good promo to kick off Raw by The Undertaker. He called his opponent at Wrestlemania 36, AJ Styles, by his real name Allen Jones and made it clear that he was a big fish in a small pond and only came to WWE when guys like Shawn Michaels, Kurt Angle, Edge, and Triple H were past their prime or had left the company. Great fire and passion from The Undertaker.

8:00 p.m.: Welcome to Sporting News’ live coverage of WWE Monday Night Raw. It is the final Raw before this weekend’s Wrestlemania 36. It’s an interesting show considering there’s no fans so how can WWE make this show feel special? Sit back, relax and enjoy the roller coaster it’s expected to be.

"I'm very sure you're going to see two versions of that fight in 2021" By Richard Damerell, James Dielhenn &...

Jarvis Landry has been remarkably consistent over the past several years. He doesn't catch a lot of TDs, but the Browns...

There wasn't a lot of viable production from either the Bengals or Browns in the teams' respective Week 1 losses, so let's hope...