Why Simone Biles Is Calling Out USA Gymnastics on Her Birthday

Biles, who turns 23 today, isn’t letting the USA Gymnastics forget about their shortcomings and lack of initiative when it came to investigating Larry Nassar‘s sexual abuse allegations.

The USA Gymnastics took to Twitter to wish the medalist a happy birthday. Sharing one of her many iconic routines on the mat, they wrote, “HAPPY BIRTHDAY to the most decorated gymnast of all time, @simonebiles! We know you will only continue to amaze us and make history.”

To which Biles powerfully replied, “how about you amaze me and do the right thing… have an independent investigation.”

The 23-year-old star is one of several Olympic athletes who have criticized USAG’s proposed $215 million settlement for survivors of Nassar’s sexual abuse and has been publicly calling out USAG and the US Olympic and Paralympic committees for an independent investigation.

According to the Wall Street Journal, USAG reportedly withheld the investigation of Nassar’s sexual abuse from the young gymnast despite the fact that back in 2015, she was among the first athletes USAG learned might possibly be sexual assaulted by the doctor.

Per the publication, Biles did not learn of the FBI investigation that was taking place until she returned home from the 2016 Olympics in Rio de Janeiro.

Nassar was accused of abusing about 499 known victims.

how about you amaze me and do the right thing… have an independent investigation https://t.co/58Gc9QUk76

In November of last year, she also tweeted her response to the WSJ‘s extensive report.

“Can’t tell you how hard this is to read and process. The pain is real and doesn’t just go away…especially when new facts are still coming out,” she wrote, along with sharing the initial story. “What’s it going to take for a complete and independent investigation of both USOPC and USAG???”

Further, the president and CEO of USA Gymnastics Li Li Leung, told E! News at the time that they were “surprised, deeply saddened and outraged to learn from the Wall Street Journal that Simone Biles was one of the athletes mentioned in the original notification in 2015 that triggered the initial Nassar investigation.” 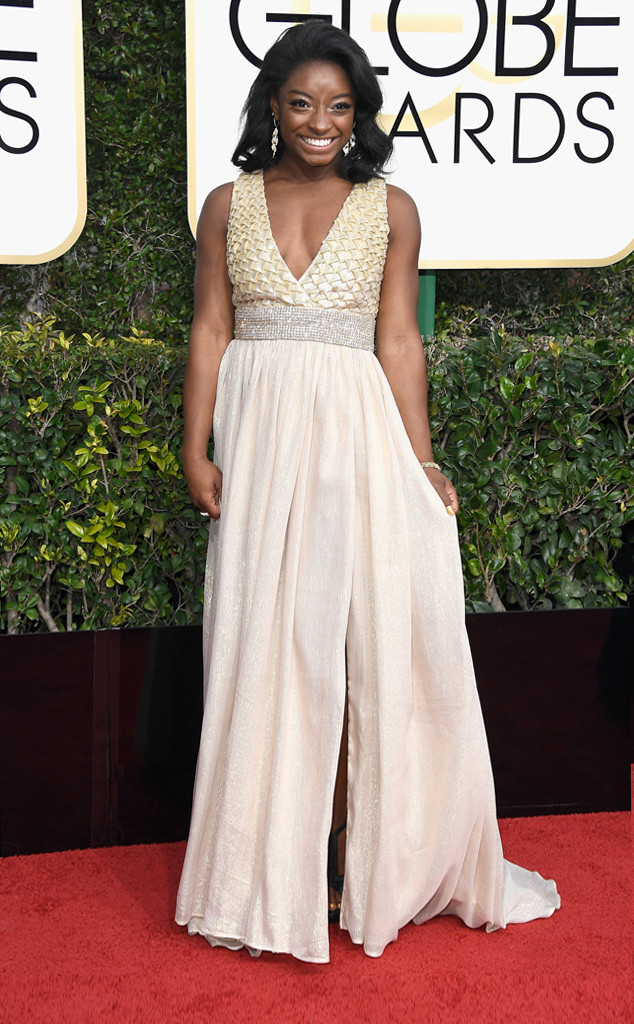 Adding that, “We have extended our apologies to Simone and her family, and we are very sorry our organization’s leadership at the time handled this situation in a disrespectful and inconsiderate way.”

“Simone is the heart and soul of women’s gymnastics, and it is heartbreaking that she and her family were not contacted at the time the concerns were first reported,” the statement continued. “Our former leadership exhibited poor judgment and unacceptable behavior. As we move forward, one of our goals is for our athletes to feel comfortable in speaking up and sharing their opinions, and to know we are listening to what they have to say. The behavior of past leaders of our organization will not deter us from doing what is right today.”

Most recently, Biles spoke with E! News in early March about the upcoming 2020 Summer Olympics (which is still scheduled to happen despite the ongoing coronavirus crisis), tackling beauty standards and her latest projects.

Of participating in the Olympics, Biles said, “It feels pretty inside. I don’t really think about all my accomplishments going in because at the end of the day, it doesn’t matter what you’ve done in the past, it’s about what you do on that day. So hopefully it goes well.”

She added, “I feel like it adds a little to the pressure but I feel like I add more pressure to myself than anybody else, so it’s just up to me.”

Madonna and Her 6 Kids Pose for Rare Family Photo

Madonna and Her 6 Kids Pose for Rare Family Photo

It was time to strike a pose at Madonna's house.  The pop icon had much to be thankful for this...

Exclusive Mike Tyson almost got into a second fight after stepping into the ring with Roy Jones Jr. -- because...

Saved By The Bell Removes Controversial Scenes on Selena Gomez

Saved By The Bell is making amends. The creative team has removed contentious scenes about Selena Gomez's 2017 kidney transplant following fan backlash. The...

The star told fans she was "in shock" and "super triggered" from the incident, noting her history of facing street...

How bad will coronavirus pandemic get? Bay Area health experts look to Italy, China for answers