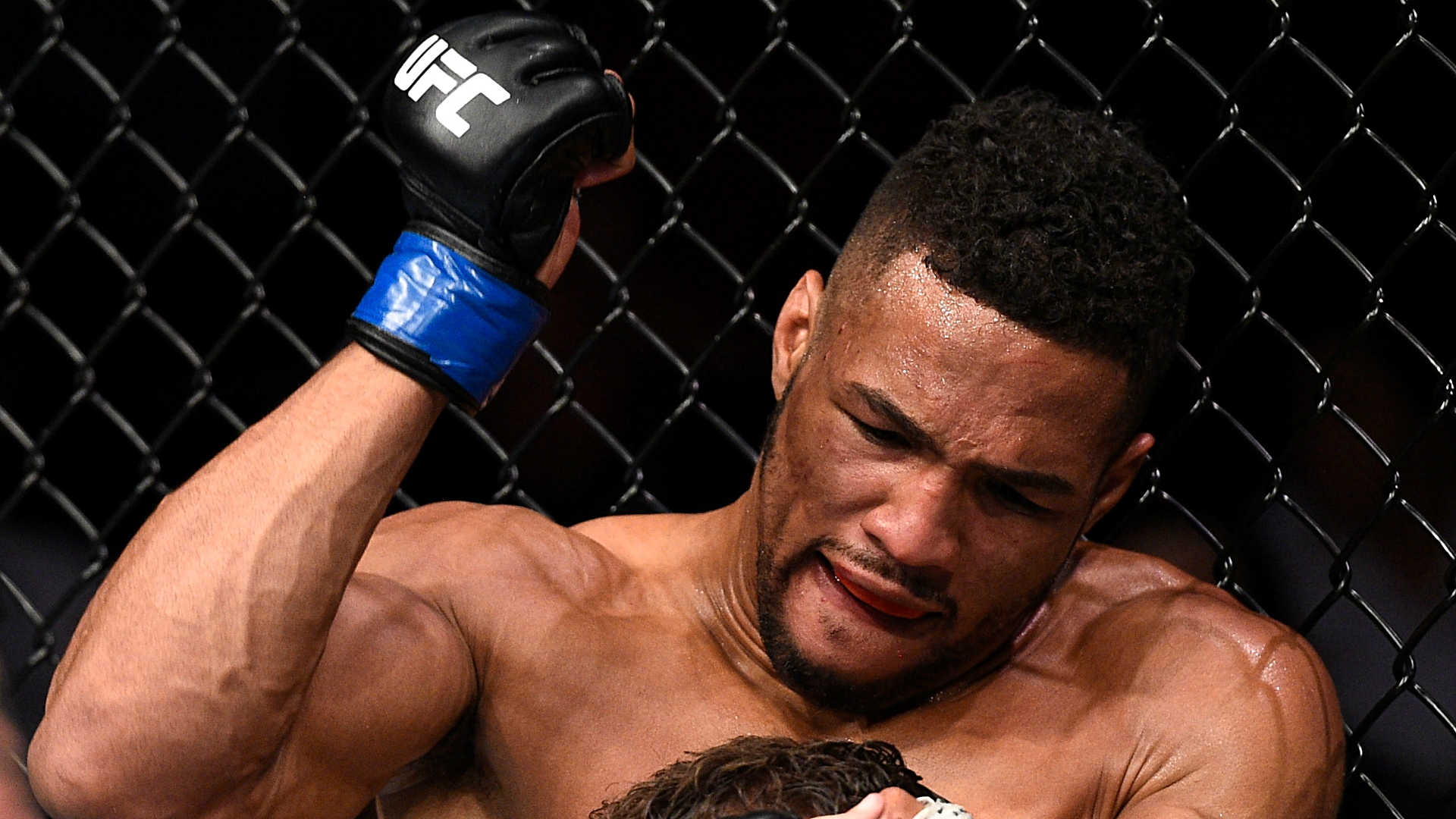 Fans were critical of the UFC for continuing on with its UFC Fight Night event on Saturday from ​Nilson Nelson Gymnasium in Brasilia, Brazil, despite sports organizations around the world either suspending or canceling their respective seasons.

Right or wrong, the show went on, albeit without fans in attendance, and the last three fights of the card ending via stoppage. The card was highlighted by Charles Oliveira using his superior grappling skills to beat Kevin Lee by submission (guilliotine choke) at 0:28 of the third round. Sporting News had the fight even at 19-19 at time of the stoppage.

The story of the fight was Oliveira controlling things on the feet and Lee (18-6) seeking a takedown whenever he sensed a little bit of trouble. It wasn’t exactly the safest place for Lee considering that Oliveira was the better of the two on the mat. That proved to be true as Oliveira attempted a series of heel hooks and submission attempts in the first two rounds.

The beginning of the third started with Oliveria continuing to get the better of the exchanges in striking. He hit a body kick and Lee immediately went for a takedown, but the 27-year-old left his head in and Oliveira quickly snatched it up when they landed on the canvas. The Brazilian was squeezing as hard as he could with a cinched in guillotine choke. The pressure was too much for Lee and he tapped out instantly. The submission was the 14th of Oliveira’s career, a UFC record.

The win extended Oliveira’s (30-8, one no-contest) streak to seven and put him in position for a marquee fight as he inches closer to a title shot. Oliveira doesn’t want to hear that talk and called out the winner for the scheduled lightweight title clash at UFC 249 between champion Khabib Nurmagomedov and Tony Ferguson on April 18.

“Tony Ferguson and Khabib, I’ll be sitting front row for that fight,” Oliveira told Michael Bisping in his post-fight interview. “There’s nowhere else to go. I will be champion.”

Round 2:  A tale of two rounds. Oliveira was lighting Lee up on the feet that stunned him more than once. Knowing he was in trouble, Lee secured the takedown and did  some good work on the ground with a series of shots and kept advancing his position. Lee’s gotten himself back in the fight. (Lee 10-9, 19-19)

Round 1:  An intriguing opening round as Oliveira controlled the action standing up until Lee took it to the ground and made it a grappling battle. Each guy had their moments but Oliveira had a slight advantage with numerous heel hook attempts and being more of the aggressor. (10-9 Oliveira)

8:02 p.m.:  It’s now time for the main event of UFC Fight Night, as Kevin Lee battles Chales Oliveira in a catchweight bout. The bout got shifted because Lee (18-5) came two pounds overweight at 158.5 pounds. Oliveira’s reeled off six consecutive wins, all via stoppage. Be interesting to see how Lee’s body reacts to missing weight and how Oliveria can take advantage of Lee’s uncalled for mistake.

Strange to see both guys coming out to their music with no fans. Have to give each guy credit as they appear to be supremely focused.

We told you this one wouldn’t go to the judges’ scorecards. Maia came out playing his game by stalking Burns, getting him against the cage and then securing the takedown. Unlike other foes, Maia couldn’t keep Burns on the mat and the fight made it back to its feet. Maia hit a jab and Burns turned his hips and clocked Maia with a flush left hook that sent his opponent crashing to the canvas. Burns thought Maia was knocked out but the latter had his wits about him. Burns saw that and pounced right on top of Maia and unloaded a series of ground punches for the biggest win of his career.

Burns made the most of his microphone time with Michael Bisping when he called former interim welterweight champion Colby Covington. Sign me up for that one.

7:48 p.m.:  It’s time for the co-main event of UFC Fight Night as No. 5-ranked Demian Maia meets No. 12-ranked Gilbert Burns in welterweight action. Maia (28-9), a former welterweight title challenger, has won three consecutive fights after losing his previous three. In his last time out, Maia sent Ben Askren into retirement with a third-round submission win. Burns (17-3) has been on a tear as well, winning four in a row. This is such an intriguing fight. Both guys have a ton of momentum. I would be surprised if this goes the distance.

Moicano wasted no time by going right at Hadzovic as soon as he got the go-ahead to begin. He secured the takedown and immediately took Hadzovic to the mat. Moicano quickly took Hadzovic’s back and secured the choke. Realizing he wasn’t going to escape, Hadzovic tapped out. When the fight came to a conclusion, Moicano stood over Hadzovic and started talking trash. Both guys had to be separated by security.

You couldn’t ask for a better start at lightweight for Moicano.

6:24 p.m.:  Right now at UFC Fight Night, Renato Moicano squares off with Damir Hadžović in lightweight. Moicano’s (13-3-1) had his struggles of late. After looking like he was on the cusp of a shot at the featherweight title, Moicano hit the skids, losing three of his last five so the Brazilian decided to move a weight class. Hadzovic’s (13-5) been inconsistent, going 3-3 in his last six fights. Something has to give here. Who can break from the pack?

The fight went from looking like rock-and-sock-em robots to a grappling match that Krylov controlled in the latter half of the first round, Walker got the better of things in the second and Krylov used his superior groundwork in the third to secure the win. It’s the first time Krylov’s won a fight by decision. A tough loss for Walker as he’s now lost back-to-back tilts. Where does Walker go from here? He went from the next big thing to a pretender in four months’ time.

7 p.m.: A good slugfest in the first round. Krylov ended up taking control and securing the takedown to end the stanza. Walker and Krylov connected on some hard shots but it didn’t have the same excitement due to the lack of a crowd response that would normally be there.

6:52 p.m.: Up next at UFC Fight Night is No.10-ranked Johnny Walker facing No. 12-ranked Nikita Krylov in light heavyweight action. Walker (17-4) looks to rebound after his shocking first-round TKO loss to Corey Anderson at UFC 244. Krylov (26-7) is in desperate need of a win, having lost two of his three fights. Don’t blink as both guys have only gone the distance one time in their respective careers.

Trinaldo dominated the entire contest on the feet. Whenever Makdessi got hit, the Canadian kept circling and circling, refusing to engage. You could see the frustration in Trinaldo’s eyes at times, but he kept it together to go 6-1 in his seven fights in Brazil and now has back-to-back wins. Impressive for a fighter who is 41 years of age and only seemingly getting better.

6:32 p.m.:  Very strange to only hear the cornermen for Trinaldo and Makdessi. Such a thudding sound every time both guys connect with a shot.

6:18 p.m.:  The main card of UFC Fight Night begins with Francisco Trinaldo taking on John Makdessi in lightweight action. This is the seventh time in Trinaldo’s (24-7) last nine fights he’s competed in his home country of Brazil, going 5-1 during that span. Makdessi (17-6) is on a good run of his own, winning three in a row. It should be a good battle to start the main card.

6:05 p.m.:  Welcome to Sporting News’ live coverage of UFC Brasilia in front of… no one from the ​Nilson Nelson Gymnasium in Brasilia, Brazil. Whether people like it or not, history is being made as the UFC has never held an official event without fans in attendance. Stay locked into what should be an intriguing night of action.

A Texas high school football player attacked a referee who ejected him from a game Thursday night. Emmanuel Duron, a...

Ellen White feels she is benefitting from playing alongside "unbelievable" Chloe Kelly at Manchester City, with their relationship on and...

Chennaiyin FC will play against Bengaluru FC in an Indian Super League (ISL) at the GMC Stadium in Bambolim, on Sunday evening....

George Russell exclusive: On replacing Lewis Hamilton and whether he can win Sakhir GP

12:03 Watch the full interview as George Russell sat down to talk to Sky F1's Simon Lazenby about his big...

Is This Your Chance To Book The Cheapest Vacation Ever?