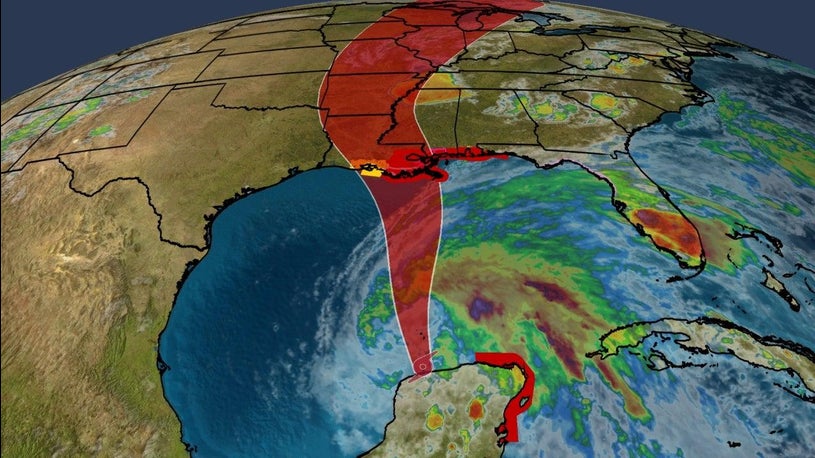 Thunderstorms are blossoming on Cristobal’s eastern and northeastern side in a plume of deep moisture.

The National Hurricane Center has issued a tropical storm warning for parts of the northern Gulf Coast from east of Morgan City, Louisiana, to the Walton/Okaloosa county line in Florida. The warning includes Lakes Pontchartrain and Maurepas. The warning means that topical storm conditions (sustained winds of 39 to 73 mph) are expected within 36 hours.

NHC has issued a storm surge warning from the mouth of the Mississippi River east to Ocean Springs, Mississippi, including Lake Borgne. This means there is a danger of life-threatening inundation from rising water moving inland from the shoreline somewhere within the specified area, generally within 36 hours.

Storm surge watches are in effect for areas on either side of the storm surge warning – from east of Morgan City, Louisiana, to the mouth of the Mississippi River, and from Indian Pass to Arepika, Florida.

Cristobal has made its predicted northward turn and is now picking up a bit of forward speed over the Gulf of Mexico following its landfall Wednesday morning just west of Ciudad del Carmen, then trek through Mexico’s Campeche and Yucatan states.

Cristobal will be drawn northward through the Gulf of Mexico through a break in subtropical high pressure.

That should bring Cristobal’s center ashore along the northern Gulf Coast of the United States Sunday night, most likely along the Louisiana coast.

After landfall, high pressure systems to the northwest and southeast of Cristobal should force the storm to turn slightly to the northwest over Louisiana and Arkansas before northerly motion resumes.

How Strong Will Cristobal Be at Landfall?

Fortunately, we do not expect an intense hurricane in the Gulf of Mexico this time.

Cristobal’s intensity forecast will be held in check by a number of factors.

First up, Cristobal’s land voyage in Mexico has kept it weak. Dry air continues to encapsulate Cristobal from the south and west. Water vapor satellite imagery also indicates a reservoir of very dry air over the western Gulf of Mexico that looks likely to be ingested by Cristobal’s circulation, a negative for tropical cyclones.

Wind shear, the change in wind speed and/or direction with height that typically hinders intensification of tropical cyclones, will be in place in the Gulf of Mexico as Cristobal heads northward.

Finally, Gulf of Mexico water temperatures are currently somewhat warmer than average for early June and warm enough to support tropical development but not as warm as in midsummer, and deep heat content is lacking in the western Gulf.

All these factors should keep a lid on significant intensification of this system as it nears the U.S. Gulf Coast late in the weekend. The most likely scenario is a tropical storm landfall.

(MORE: A Brief History of June Tropical Storms and Hurricanes)

Even if Cristobal doesn’t attain hurricane status, that doesn’t mean it won’t have serious impacts.

Cristobal is expected to have a rather large wind field for a tropical storm. Furthermore, early-June storms like Cristobal tend to be lopsided, with significant impacts far from the track of the center.

In this case, with a northward-moving Cristobal in the Gulf of Mexico, this will spread significant impacts well to the east of the center. These impacts may also arrive well ahead of the center making landfall.

This is yet another case where the forecast path will not tell the whole story of impacts.

The National Weather Service has already issued flood watches from Louisiana to Florida.

Some of these flood watches, particularly in the Florida Peninsula, cover the potential for bands of heavy rain well ahead of Cristobal.

The heaviest rainbands from Cristobal should begin to arrive along parts of the Gulf Coast Saturday, particularly in the afternoon and evening.

Again, given the storm’s lopsided nature, the heaviest rain and highest flood threat is expected to fall along and well to the east of its path from Louisiana to at least the Florida Panhandle, if not parts of the Florida Peninsula.

This heavy rain could persist in bands along the northern Gulf Coast into Monday, and pockets of heavy rain will also spread northward as Cristobal heads inland into Tuesday.

(MORE: Cristobal’s Rain Could Wipe Out Drought, But It Might Be Too Much of a Good Thing)

Cristobal’s large wind field will drive high surf to the beaches of the entire Gulf Coast, but particularly along and to the east of the track from Louisiana to western Florida, generating dangerous rip currents and coastal flooding.

These far-reaching impacts are expected to increase beginning Saturday and may persist into early Monday.

Here are the high tides of most concern for coastal and storm surge flooding along the northern Gulf Coast from Louisiana to western Florida:

-Monday midday: Lingering coastal flooding possible, but not as high as Sunday in most areas, except perhaps parts of southeast Louisiana.

As mentioned earlier, the most likely intensity of Cristobal at landfall along the northern Gulf Coast is as a tropical storm.

According to the National Hurricane Center, tropical-storm-force winds (39-plus mph) could arrive along parts of the northern Gulf Coast as soon as late Saturday, but are most likely expected to arrive by Sunday, continuing into Sunday night or Monday morning.

These winds, combined with rain-soaked ground, may lead to downed trees and power outages.

Given very humid air, moderate wind shear and unstable air, a few tropical waterspouts and tornadoes are possible from Florida’s west coast to southeastern Louisiana through Sunday. These tornadoes should be short-lived and weak.

Interests along the Gulf coasts of the U.S. should monitor Cristobal’s progress closely. Check back to weather.com for updates over the next several days. If anything, this is a reminder to refresh or develop your hurricane plan now.

The remnant from Cristobal will be drawn north into the Mississippi Valley, then into the Great Lakes, merging with a cold front by the middle of next week, wringing out locally heavy rain along its path from Arkansas and Missouri into Illinois, Wisconsin, Michigan.

The most serious threat right now is for more inundating rain over areas that have already been clobbered with torrential rain and deadly flooding in southern Mexico and Central America.

The National Hurricane Center said Thursday parts of eastern Mexico have picked up over 26 inches of rain since last weekend. Parts Mexico’s Campeche state have had more than a foot (~300 mm) since Tuesday while the states of Tabasco and Yucatan have received more than 6 inches (~150 mm).

Life-threatening flooding and mudslides are likely in these areas, particularly in hilly or mountainous terrain.

Another 4 to 6 inches of rain, with locally higher amounts, is expected through Saturday in parts of eastern Mexico, Belize, southern Guatemala, El Salvador and southern Honduras.

In addition to Cristobal, this rainfall is also being fueled by what’s called a Central American Gyre, or CAG. This “gyre” is a large, broad area of low pressure that often forms in late spring and early fall over Central America and the western Caribbean Sea.

Amanda’s leftover energy and spin played a role in triggering the development of Tropical Depression Three in the southwestern Gulf of Mexico Monday afternoon, which then strengthened into Tropical Storm Cristobal on Tuesday.

From there, Cristobal moved into western portions of Mexico’s Campeche state west of Ciudad del Carmen while slinging moisture ashore and slowly weakening. It then, as a Tropical Depression, moved into northern Guatemala at a snails pace before turning northward back into the Yucatan Peninsula.

DENVER (CBS4) – Early December can sometimes be cold and snowy around Colorado but not this year. A big ridge...

China this week revealed plans to drastically expand an experimental weather modification program to cover an area of over 5.5...

An example of a five-day forecast from The Weather Channel app. We highlighted what grabbed our attention first.A snowfall forecast...

LETTER: Business owner says it's time to reopen the north