Travel restrictions meant to slow the spread of the novel coronavirus mean one Skagway resident is stranded nearly 8,000 miles from home. 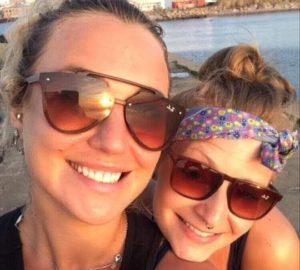 The plan was an extended trip through South America while it was winter in Skagway. Meghan March didn’t anticipate a mysterious virus would virtually shut down international tourism while she was away.

“So we’ve tried to get out multiple times now, but we’ve had no luck,” said March.

March and her Canadian travel partner headed South in late February, before there was a widespread understanding of the dangers of the novel coronavirus. They spent a couple weeks in Brazil with March’s family, toured Uruguay, and then got on a boat to Buenos Aires, Argentina.

Their plan was to visit Peru next, but by then the spread of the coronavirus had countries shutting down their borders. They couldn’t get to Peru. They couldn’t even get back to March’s family in Brazil. They were stuck.

“It’s really been pretty crazy because I think it was shortly after that, that the president here in Argentina decided that they were going to do a quarantine and a travel ban as well. And there’s been a lot of misinformation, so we figured that we were stuck here,” she said.

But March said she’s found some commercial flights out. The only problem is every time she rebooked her flight, it got cancelled. She said the U.S. embassy suggested a flight to Miami, but that was too costly and stranded her in the wrong corner of the nation. Currently, she has a flight booked with travel vouchers from her original flight for April 14th, a day after the Argentine travel ban is scheduled to end.

March says she feels safe and comfortable for now. Buenos Aires is under shelter in place orders. There are fewer than 2,000 cases of the virus in Argentina.

“Everything seems to be pretty calm here. There’s still toilet paper on the shelves and other essential items and such so people aren’t really freaking out here. The owner of the building or the apartment that we’re renting has been very, very kind in allowing us to stay here.”

March is not the only Alaskan stuck overseas. Senator Dan Sullivan’s office is aware of over 60 people who got stranded by coronavirus. According to his Alaska office, most of them are home now, but more than a dozen may need repatriation assistance.

For March, when or how that assistance is going to come is unclear.

The U.S. Embassy in Argentina lists one flight out of the country, to Brazil, which offers direct flights to the United States. The embassy website says:

“If you need to leave Argentina, you should strongly consider booking this flight, otherwise you should be prepared to remain abroad for an indefinite period.”

WXOW’s travel through the years: expect the unexpected

New Zealanders may be able to travel to some Australian states before Christmas, Ardern says

WXOW’s travel through the years: expect the unexpected

(WXOW) - If News 19 had a frequent flier club, Amy DuPont would be a platinum member. As an award-winning...

New Zealanders may be able to travel to some Australian states before Christmas, Ardern says

WELLINGTON (Reuters) - Travel between New Zealand and some states of Australia is possible before the end of the year,...

The largest city in Brazil’s Amazon has closed bars and river beaches to contain a fresh surge of coronavirus cases,...

Looking for travel opportunities in the last quarter of the year

Randall Monk: Be mindful that all are essential - Lifestyle - The Augusta Chronicle