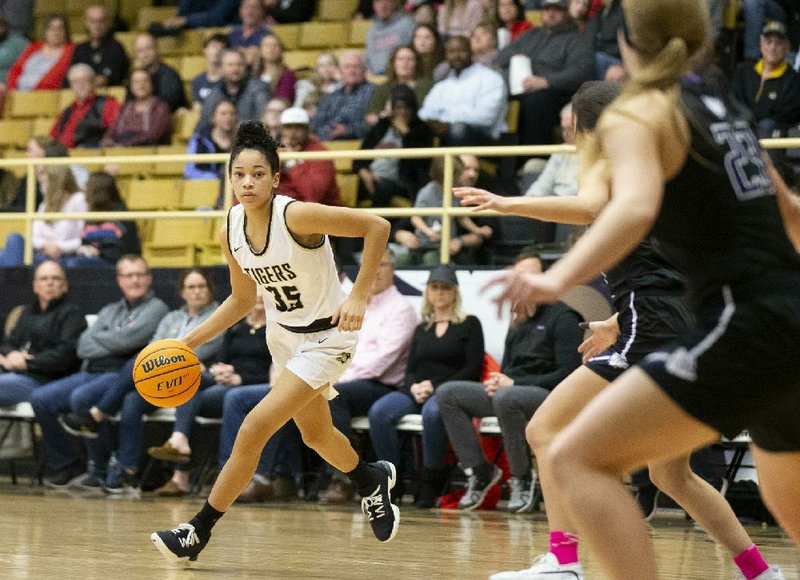 Jada Brown dribbles against Fayetteville during a game on Feb. 14. Bentonville was 27-1 going into the Class 6A girls championship game against Fayetteville. However, the game was postponed because of coronavirus concerns and its status is to be determined.
(Special to the NWA Democrat-Gazette/David Beach)

It was supposed to be the opportunity for Bentonville’s girls to place the proper exclamation mark on the best basketball season in school history.

Instead, the Lady Tigers’ chance to play a final game — the Class 6A state championship — remains a question mark, more than three weeks after their scheduled showdown in Hot Springs against 6A-West Conference rival Fayetteville was postponed because of the coronavirus pandemic.

“I think about it every day,” Bentonville Coach Tom Halbmaier said earlier this week. “You have to have the mindset that the Arkansas Activities Association could come back and say we’re going play it April 30.

“Until we get a final say that the game’s been canceled, I go through things every day. I begin to think about what a certain scenario would be and a lot of stuff starts running through my mind.”

Halbmaier said his team started the season with a common goal — to win a state championship after it slipped out of Bentonville’s hands in the closing seconds of last year’s game against Fort Smith Northside. The Lady Tigers (27-1) did everything they could to make that happen as they won the 6A-West regular-season title, then reached the title game with state tournament victories against North Little Rock and Conway.

Bentonville had just finished its Thursday practice — the 139th workout as a team since the school year started, and the last one on campus before heading to Hot Springs. The Lady Tigers were preparing to head to the film room when Halbmaier had to announce that their game had been put on hold until further notice.

“I think we were all just kind of speechless,” senior guard Emily Sanders said. “It was unbelievable. We didn’t think this would have ever happened. I think of how hard we have worked since the end of last season all the way to now, and just like that the opportunity is gone. It’s really hard to understand something like that ever happened.”

The following day, the AAA announced all schools would go under an athletic “dead period,” meaning athletic facilities were closed and coaches couldn’t have any personal contact with players. That period began March 16 and was originally scheduled to end Monday, but it has been extended through April 17 for the time being.

It has left Bentonville’s seniors wondering if they have already put on the Lady Tigers uniform for the final time.

“It’s run through my mind basically every day,” senior guard Natalie Smith said. “It’s like not having an end to the season. It’s really weird right now because we can’t even be with our teammates. They’re like my best friends and my family, so it’s weird not seeing them every day. Now we can’t even go to the gym and shoot.”

The Lady Tigers had to overcome some obstacles in order to enjoy a successful season. Sanders, a returning starter at point guard who has signed to play at John Brown University, suffered a knee injury during the offseason and missed the entire nonconference schedule. She then missed three conference games after she tweaked her knee again.

That left Katie Kultgen to take over that position to begin the season, but the junior suffered a knee injury during the final nonconference game at Jonesboro and missed the remainder of the season. Halbmaier then turned to Jada Brown to be the team’s point guard, and the sophomore wound up being the team’s second-leading scorer as the Lady Tigers went through conference play unscathed.

“We had some challenges this year, and I’m a big believer that you will go through some adversity,” Halbmaier said. “What Emily Sanders had to go through, I feel sorry for the kid and I believe she thinks she could do more. Katie’s injury against Jonesboro was a loss because she was starting to come into her own.

“But these girls never came to practice not willing to work. It made my job easier. They are so competitive, and they challenge one another. They also encourage one another, and they got after it. I could not enjoy a team as much as I have enjoyed this group of girls.”

Whether or not Bentonville will get the chance to play the state championship game remains to be seen. Halbmaier said he has already tweaked his strategy “two or three times” as he plays the game out in his head and thinks about a certain situation that could happen.

In the meantime, the Lady Tigers are left to wonder what happens next, and they must continue to prepare for their biggest game on their own. And they must do so at their homes as the athletic dead period continues.

“We worked so hard to be prepared all season long, and I thought we were prepared,” Sanders said. “But now the longer we are off, the longer our timing will be off because we haven’t practiced with each other. I think it would take a week just to get our timing and our rhythm back, then another week to really prepare to play the game.”

PORTLAND, Maine (AP) — Police in Maine have arrested a man accused of killing his father’s cat with a frying...

CHICKASHA, Okla. (KFOR) – The City of Chickasha is known for its ‘Festival of Light’ display, but now there’s hope...

Joke-weary Austrian village changes its name to Fugging, and more of this week’s weirdest news | Weird