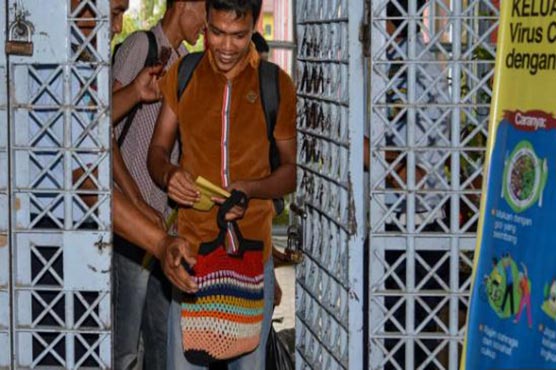 The group were among more than 30,000 inmates recently granted early parole.

GORONTALO (AFP) – A group of Indonesian inmates celebrated their early release over coronavirus fears in a video that shows them dancing out of prison to a remixed version of music from Spongebob Squarepants.

Swaying back and forth with smiles on their faces, dozens of inmates formed a makeshift dance line as they exited the Gorontalo Correction Facility on Sulawesi island last week.

A remix of tunes from cartoon show Spongebob Squarepants and hip-swivelling traditional music known as dangdut plays in the background.

The group were among more than 30,000 inmates recently granted early parole to prevent the spread of the deadly respiratory illness inside Indonesia’s overcrowded prisons, which are routinely criticised for their deplorable conditions.

Corrections officials recorded the release of about 30 prisoners which was later uploaded to popular video-sharing app TikTok, where it went viral.

“One of the inmates asked me to record it,” said prison official Muzkiratillah Mampa.

“They wanted a video for a bit of memorabilia,” she added.

While prisoners are not supposed to use mobile phones, Mampa said inmates had spotted guards using the popular app.

“We often get bored guarding the facility so sometimes we make TikTok videos to refresh our minds,” she said.

As of Tuesday, some 82 prisoners had been released from the jail under the early release plan.

Published On 23 October,2020 09:43 am A marriage loan will be offered to the civil servant married for the second...

FORT MYERS, Fla. / CNN — Bacon makes everything taste better, but does it make everything smell better? Hormel, a...

From sound trucks to selfies, here are weird laws about voting in Texas

Democracy, liberty and justice - we're taught as Americans that our vote helps actively practice and ensure these Constitutional promises....

Bartleby – What the armed forces can teach business | Business