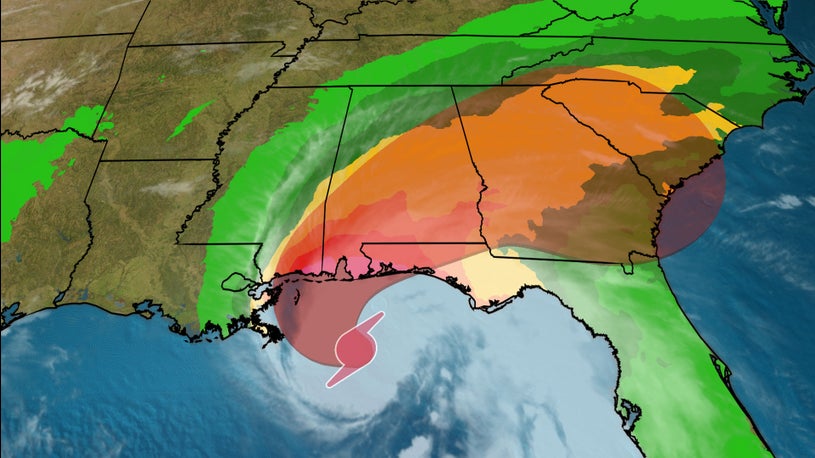 Hurricane Sally has rapidly intensified and additional strengthening is possible as it slowly moves toward the northern Gulf Coast, where it will bring an extremely dangerous storm surge, flooding rainfall and damaging winds this week. Sally will also pose a threat of flooding rainfall farther inland across parts of the Southeast.

Sally will produce a deadly duo of human-height storm surge and a foot or more of rainfall in parts of Louisiana, Mississippi and Alabama. Nearly 90% of deaths caused by hurricanes are the result of a combination of rainfall flooding, storm surge and rip currents.

(MORE: Evacuations Ordered Ahead of Sally)

A hurricane warning has been issued from Grand Isle, Louisiana, eastward to Navarre, Florida, including Lake Pontchartrain, Lake Maurepas and metropolitan New Orleans. Hurricane conditions (winds 74 mph or greater) are expected in some parts of this area early Tuesday.

Tropical storm warnings are in effect to west and east of this hurricane warning, including parts of Louisiana and the Florida Panhandle.

A storm surge warning is also in effect from Port Fourchon, Louisiana, to the Okaloosa/Walton County Line in Florida, including Mobile Bay, Lake Pontchartrain, Lake Maurepas and Lake Borgne. This means there will be a danger of life-threatening inundation from storm surge within the warning area in the next 36 hours.

The hurricane became better organized Monday and its circulation center reformed farther to the east near a blow-up of thunderstorms that occurred on Monday morning. Its intensity plateaued Monday evening but additional strengthening is possible.

Bands of rain and gusty winds will be on the increase in parts of the northern Gulf Coast into early Tuesday.

A buoy south of Dauphin Island, Alabama, measured a sustained wind of 61 mph and a wind gust of 69 mph Monday night.

Water levels have also risen on the coast from southeast Louisiana to the western Florida Panhandle. Tide gauges in these areas show minor coastal flooding occurred Monday morning in some areas.

Sally is expected to continue strengthening as it creeps west-northwestward toward the northern Gulf Coast into Tuesday morning. The hurricane is forecast to then turn more northward near southeast Louisiana and Mississippi sometime on Tuesday.

Sally is forecast to be at Category 2 intensity as it nears a final landfall in southeast Louisiana, Mississippi or Alabama late Tuesday into early Wednesday. However, there is uncertainty in this intensity forecast as well as its track, so stay alert for possible changes since Sally could grow stronger and approach major hurricane strength.

Sally is also slowing down and will continue to move very slowly near the coast of southeast Louisiana and Mississippi through Tuesday night. That slow forward speed will result in prolonged impacts from rainfall, storm surge and strong winds.

It’s important to note that impacts from Sally on the Gulf Coast will extend east of the forecast path, including the Florida Panhandle.

Here’s a look at what to expect.

A potentially life-threatening storm surge is expected along the northern Gulf Coast through midweek. This could be exacerbated by heavy rainfall occurring in areas experiencing storm surge.

Below is a look at the areas with the highest storm surge forecast for the Gulf Coast if peak surge occurs at the time of high tide, according to the NHC. The next high tide along the Louisiana, Mississippi and Alabama coasts is in the morning hours on Tuesday.

-6 to 9 feet from the mouth of the Mississippi River to Dauphin Island, Alabama, including Mobile Bay and Lake Borgne.

-4 to 7 feet from Dauphin Island, Alabama, to the Florida border.

The peak storm surge will be near and to the right of where the center of Sally makes landfall. Large waves could worsen the storm surge impacts in some areas and cause significant beach erosion on much of the northern Gulf Coast.

Sally is expected to move slowly as it approaches the Gulf Coast, which means there is a serious threat of life-threatening flooding rainfall.

Flash flooding and minor to locally major river flooding could occur from southeastern Louisiana into parts of Mississippi, Alabama and the Florida Panhandle this week.

NOAA’s Weather Prediction Center has issued a rare high risk of excessive rainfall for southeast Louisiana as well as coastal Mississippi, coastal Alabama and the far western Florida Panhandle for Tuesday into Wednesday.

Here is the latest rainfall forecast from the NHC.

-8 to 16 inches with locally up to 24 inches on the Gulf Coast from the western Florida Panhandle to southern Alabama and far southeastern Mississippi into the middle of the week.

-4 to 8 inches, with locally up to 12 inches, is possible farther inland across portions of eastern Mississippi, central Alabama, northern Georgia, southeastern Tennessee and the western Carolinas. Significant flash and urban flooding is likely, as well as widespread minor to moderate flooding on some rivers in these areas.

Flood watches have been issued by the National Weather Service in portions of the Florida Panhandle, southern and central Alabama, southern Mississippi and southeastern Louisiana.

The winds could contribute to some structural damage, downed trees and power outages.

Here is the latest wind gust forecast. Changes to this forecast are likely depending on the exact future track and intensity of Sally.

There will be an increasing chance of isolated tornadoes from Sally into early Tuesday, from far southeast Louisiana to southern Mississippi, southern Alabama and into portions of the Florida Panhandle.

The isolated tornado threat might continue on Tuesday and Wednesday in parts of these same general areas.

The tropical depression strengthened into Tropical Storm Sally once it moved over the southeast Gulf of Mexico on Saturday afternoon.

Flooding rainfall soaked parts of the Florida Keys on Saturday. Some areas in the Keys picked up nearly a foot of rainfall.

Rainfall moving in Overnight thunderstorms were into northeastern portions of Minnesota and Wisconsin. Scattered light showers will spread across the...

9pm Wednesday...Now that was a soaker during the evening commute. A strong Pacific frontal system moved onshore the 2nd half...

CHICAGO (WLS) -- Partly cloudy and quiet Wednesday night. Lows in the 50s.Get the latest weather info with our ABC7...

Weather on the Web Wednesday, Sept. 23rd AM