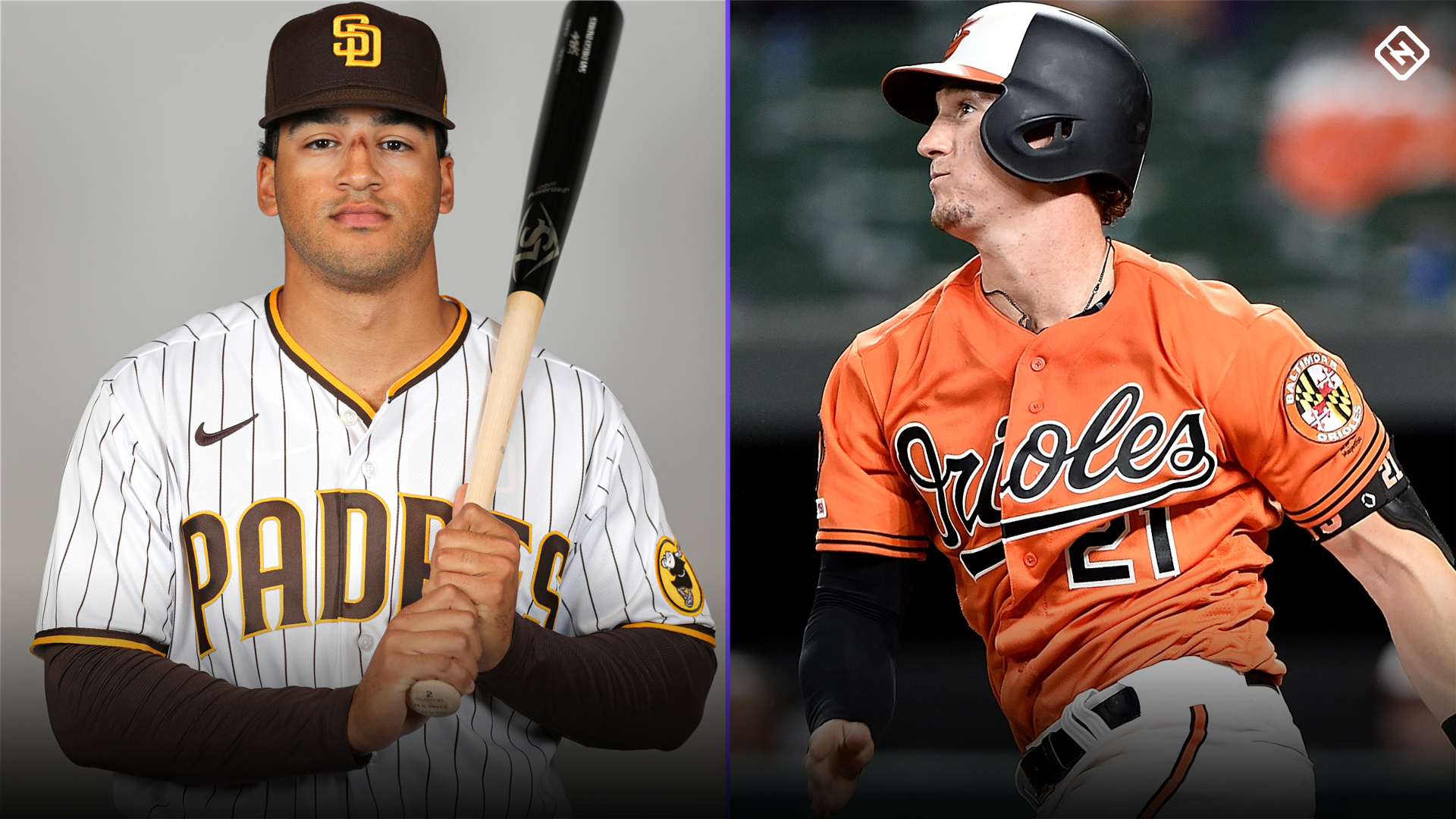 Whether you play in a three-OF or five-OF fantasy baseball league, you’re going to need a handy list of outfield sleepers for your draft cheat sheet. Every year there are surprise OF breakouts, which is good because you every year you probably have at least one surprise bust on your team. You can find undervalued outfielders at any point during your draft, but finding the ones with the most upside is a little more difficult, especially when you factor in category needs.

We’ve put together a list of OF sleepers that runs the spectrum of known quantities who could outproduce their average draft positions to under-the-radar guys who will likely need an injury to earn an everyday role. Depending on how deep your league is, you will want to familiarize yourself with the players below. Even if they go undrafted, they’re worth watching early in the season or when they’re called up.

Oscar Mercado, Indians. Mercado gave fantasy owners a glimpse of his upside last year, hitting 15 homers and stealing 15 bases in 115 games, and many are expecting him to only get better this year. There are some minor red flags in his hitting profile, as he didn’t take many walks last year and his power is somewhat limited, but he should steal a bunch of bases, which will always be sought after by fantasy owners. Mercado isn’t exactly being “undervalued” in drafts, but if he can continue to develop his power and raise his BB-rate to what he did at Triple-A (29 walks in 259 PAs), he could outperform even the most optimistic expectations.

Kyle Tucker, Astros. Tucker hit 34 HRs and stole 30 bases in 125 games at Triple-A last year and added another four homers and five steals in 22 major league games. He’s proven just about everything he can in the minors, and all he needs is an everyday job to break out in the majors. Heading into the season, he’s slated to share the right field job with Josh Reddick, but Tucker could eventually take over with a hot start. He’ll also be first in line for at-bats if injuries strike someone like Yuli Gurriel, Yordan Alvarez, or Michael Brantley. One way or another, there’s a good chance Tucker sees significant playing time this year, and if he does, he’ll outproduce his average draft position.

Aristides Aquino, Reds. Aquino was a sensation last year after getting called up, hitting 19 HRs in just 56 games. Normally, this type of player would be overvalued the following season, but Aquino is seemingly on the outside looking in for an everyday job after Cincinnati signed Nicholas Castellanos and Mike Moustakas, so he actually has the potential to be undervalued now. We have a feeling he’ll find his way into the lineup most days, whether it’s because of injuries, more off-days for Joey Votto (with Castellanos sliding to first), or simply Jesse Winker playing less. Aquino has too much upside to keep on the bench, so he’s well worth drafting, especially in daily transaction leagues.

Lourdes Gurriel Jr., Blue Jays (also eligible at 2B and expected to play some 1B this year). Gurriel made our sleeper list last year, and he came through when on the field, clubbing 20 HRs in just 84 games. He even stole six bases, showcasing some upside there. The Blue Jays have a lot of OF/1B/DH candidates, so Gurriel can’t afford a slow start, but he’ll hit homers and drive in runs as long as he’s on the field. A solid average and handful of steals makes him a valuable contributor given his mid-round ADP.

Ian Happ, Cubs (also eligible at 2B and 3B). Happ spent more of last season at Triple-A (99 games) than in the majors (56 games), but he produced at both levels, totaling 27 HRs and 11 SBs. He’s unlikely to ever hit for a good average, but he can quietly give you solid numbers in all of the other categories. Playing time is the biggest worry, but he’s slated to start the season in center field and can fill in at 2B and 3B if needed. One way or another, the 25-year-old switch-hitter should be in the lineup most days, and if he is, he’ll provide a lot of value given his low cost.

Avisail Garcia, Brewers. Garcia was one of our favorite breakout picks last year, and he made some strides (20 HRs, 10 SBs in 125 games) but didn’t quite produce as we expected. Now in an even better hitters park in Milwaukee, he could break all the way out with regular at-bats. That’s not guaranteed, as he’ll be competing for playing time with Ryan Braun and Justin Smoak, but he has the highest upside of three if he plays every day.

Trent Grisham, Padres. Grisham popped 32 homers and stole 13 bases across Double-A, Triple-A and the majors last year in Milwaukee’s organization. Now with a clear path to playing time in San Diego, he should open the season with an everyday job. Grisham has always been a high-OBP guy in the minors (.376) thanks to a high walk rate, and his strikeout rate is relatively low. Last season was really the first time he hit for power, so it’s unclear if that will carry over to a worse hitting environment, but Grisham has a lot of upside in San Diego’s solid lineup, especially in OBP leagues.

Jo Adell, Angels. Adell doesn’t have a clear path to playing time heading into 2020, but the 20-year-old slugger has already ascended to Triple-A and figures to be in the majors at some point early this season. His career .298/.361/.518 line in the minors is even more impressive than it looks when you factor in his age, and he has a little bit of a speed with 30 career steals. Brian Goodwin isn’t the long-term answer in right field for the Angels, so Adell is worth drafting and stashing.

Austin Hays, Orioles. Hays played across five levels last season, finishing in the majors where he hit .309/.373/.574 with four homers and two steals in 21 games. The 24-year-old outfielder saw his prospect shine dim after an injury-plagued 2018 (ankle) and start of ’19 (thumb), but now healthy, he could return to the form that saw him skyrocket to the majors in ’17. He’s unlikely to post a batting line as good as last season over a full campaign, but given his home park, it wouldn’t be a shock to see him pop 20-plus HRs and steal 10-15 bases. The upside is there for more.

Teoscar Hernandez, Blue Jays. Hernandez broke out in the second half last season, clubbing 18 HRs over 60 games and finishing with 26 for the season (122 games). There are some playing time concerns heading into this year, but assuming he gets everyday at-bats, the 27-year-old righty will be a cheap source of power who can also swipe a few bases. His average figures to hurt more than help, but he still has plenty of offensive upside.

Alex Verdugo, Red Sox. Verdugo is currently dealing with a stress facture in his back, which is the type of injury that can ruin a season before it starts. If Verdugo is able to get healthy and back on the field relatively early in the year, he’s an interesting fantasy prospect given his batting line with the Dodgers last year (.294/.342/.475). He’s a low-strikeout hitter with developing power, and we know there will be a lot of run-scoring and run-producing opportunities in Boston’s offense.

Tyler O’Neill, Cardinals. O’Neill is a proven slugger at the minor league level (140 HRs over 566 games), and he’s popped 14 HRs in two 60-game stints in the majors the past two seasons. The 24-year-old righty is in position to have an everyday job as the Cardinals’ left fielder to open the year, and if he does, he has major power and run-producing upside.

Anthony Santander, Orioles. Santander seemingly came out of nowhere last year to hit 20 HRs in just 93 games. The 25-year-old switch-hitter will have to contend with similarly skilled players, such as Dwight Smith Jr. and Cedric Mullins, for playing time, but obviously if he’s in the lineup, he can hit homers, and that should continue as long as he’s playing in Baltimore.

Jake Fraley, Mariners. With Mitch Haniger (back) on the shelf for the foreseeable future, Fraley has a chance to play every day in Seattle’s outfield. The 24-year-old lefty is a career .286/.362/.480 hitter in the minors, and he clubbed 19 HRs and stole 22 bases in 99 games across two levels last season. He likely won’t post huge numbers this season, but anyone who can steal some bases and provide some pop is worth a look in fantasy leagues.

Dominic Smith, Mets (also eligible at 1B). Smith just needs everyday at-bats to produce. The 24-year-old lefty hit .282/.355/.525 with 11 HRs in 89 games last year. However, with Pete Alonso locking down 1B and J.D. Davis, Brandon Nimmo, and Michael Conforto set in the OF, Smith would appear to be a man without a position. That’s true to start the year, but Smith will be very valuable as soon as there’s an injury (or he’s traded). Perhaps most noteworthy about Smith is that he actually lefties (.303/.361/.515) better than righties (.278/.354/.528) last year, so he doesn’t necessarily need to be a platoon player. It’s tough to invest a draft pick in someone like Smith, but he’s worth a pickup if he starts getting consistent playing time.

The stories from Wednesday's action across Europe, including more silverware for Bayern Munich and league wins for Real Madrid and...

The curtain has officially come down. After 15 years, a combined 1,004 regular-season and playoff games and 459 regular season wins,...

Celtic have made an approach for Tottenham left-back Ryan Sessegnon – but it is believed the finances of any potential...

With three weeks of the 2020 NFL season in the books, many under-the-radar players have emerged as productive NFL DFS contributors...

Jose Mourinho hailed Tottenham as "magnificent" after their Carabao Cup shootout win against Chelsea, while revealing more about a touchline...