Gov. Andrew Cuomo on Wednesday, March 25, 2020, vowed that New York would win the fight against coronavirus.

New York’s governor on Saturday ripped suggestions by President Donald Trump that he might institute a ban on New Yorkers’ travel to others states amid the coronavirus,  and Cuomo threatened to sue Rhode Island if it continues to seek out New Yorkers entering its borders.

“I don’t believe that any federal administration could be serious about physical lockdowns on parts of states across this country,” Cuomo said on CNN.

“I don’t believe it’s legal. It would be economic chaos.”

Trump said Saturday he is considering imposing an “enforceable” quarantine on New York and parts of New Jersey and Connecticut, areas hard-hit by the coronavirus.

“Some people would like to see New York quarantined because it’s a hot spot,” Trump told reporters from the White House South Lawn as he departed for Norfolk, Va.

“I’m thinking about that right now. We might not have to do it, but there’s a possibility that sometime today we’ll do a quarantine.” 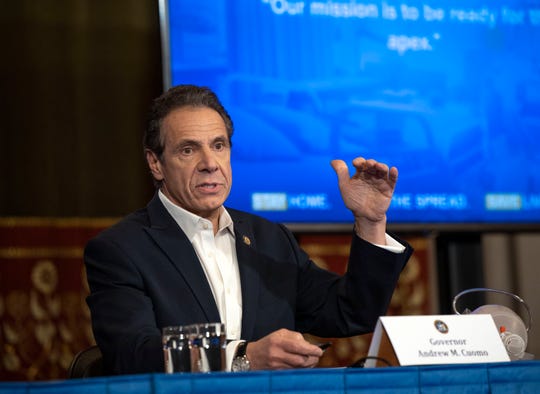 Gov. Andrew Cuomo provides a coronavirus update during a press conference in the Red Room at the State Capitol in Albany on March 28, 2020. (Photo: Mike Groll/Office of Governor Andrew M. Cuomo)

Cuomo said he talked to Trump on Saturday morning just before his comments at the White House, saying the Republican president didn’t mention the idea.

Nonetheless, Cuomo tore into the suggestion, saying it would be something not seen since the Civil War to restrict movement across states.

“It would be a federal declaration of war on states,” Cuomo said, adding he doubted Trump, a native New Yorker, would take the drastic steps.

Still, governors have started to take action to limit New Yorkers travel into other states, fearing they might bring the virus with them. New York had about 52,000 positive cases of coronavirus on Saturday, by far the most in the nation, along with 528 deaths.

Governors in Texas, Florida, Maryland and South Carolina this week ordered people arriving from the New York area – including New Jersey and Connecticut – and other virus hot spots to self-quarantine for at least 14 days upon arrival.

More: Coronavirus in New York: Check our interactive map of cases by county

Empire State vs. Biggest Little State in the Union 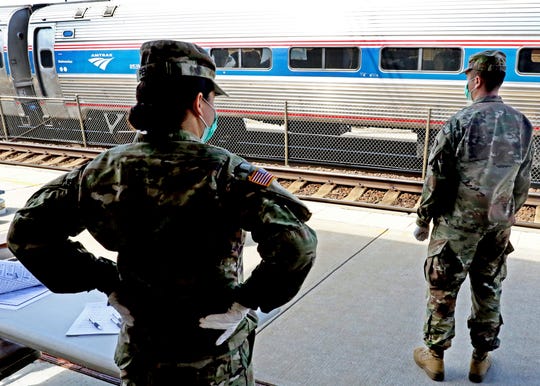 Members of the 1207th Rhode Island National Guard unit stand at the Westerly, R.I., Amtrak station Friday, March 27, 2020, to inform passengers from New York of the 14-day quarantine restrictions if disembarking in Rhode Island ordered by Gov. Gina Raimondo. At the time of the photo, no passengers had disembarked at the station. (Photo: Harold Hanka, AP)

Rhode Island State Police on Friday began pulling over drivers with New York plates so that National Guard officials can collect contact information and inform them of a mandatory, 14-day quarantine.

The Providence Journal reported authorities were already going door to door in summer communities looking for New York license plates and telling them to quarantine for 14 days.

The American Civil Liberties Union of Rhode Island contended the order violated the Fourth Amendment protection against unlawful search, and Cuomo also doubted the legality of the state’s move — saying New York might have to sue.

“We’re talking to Rhode Island,” Cuomo said. “If they don’t roll back that policy, I’m going to sue Rhode Island.”

But Cuomo said he hopes the situation can be resolved without any lawsuits, saying he could simply turn around and ban people from other states from New York — which would lead to chaos among states.

The fight over New Yorkers’ traveling away from their homes is playing out intrastate, as well.

Some upstate counties do not want downstate New Yorkers visiting their weekend homes or renting houses to those looking to get out of New York City, where the majority of the cases are.

Cuomo has said he has no plans to restrict travel within the state. He has already ordered most businesses shuttered and closed all schools for another two weeks.

More: ‘This is a plea:’ Upstate NY counties ask visitors, weekenders to stay away as coronavirus spreads

Joseph Spector is the New York state editor for the USA TODAY Network. He can be reached at JSPECTOR@Gannett.com or followed on Twitter: @GannettAlbany

We cover the stories from the New York State Capitol and across New York that matter most to you and your family. Please consider supporting our efforts with a subscription to the New York publication nearest you. Check out the latest offer.

MANILA, Philippines (AP) — The Philippines has lifted a ban on non-essential foreign trips by Filipinos, but the immigration bureau...

What to KnowConnecticut tweaked its quarantine list guidelines Monday to tighten the standards; Gov. Ned Lamont says enforcing the order...