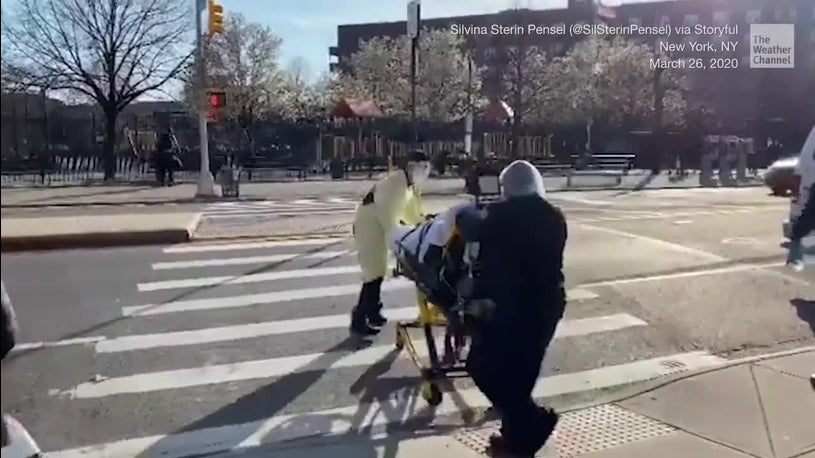 President Donald Trump said Saturday he may impose a quarantine on parts of New York, New Jersey and Connecticut to try and slow the spread of coronavirus.

“I am giving consideration to a QUARANTINE of developing ‘hot spots,’ New York, New Jersey, and Connecticut. A decision will be made, one way or another, shortly,” Trump said just after 1:30 p.m. EST Saturday on Twitter.

Trump earlier said a federally mandated lockdown would include “enforceable” travel restrictions on people planning to leave the region because of the outbreak, The Washington Post reported.

Gov. Andrew Cuomo said Trump had not spoken mentioned any potential quarantine order to him.

New York is the current epicenter of the U.S. outbreak. Residents have fled the region in recent weeks, flooding into places like Florida, where Gov. Ron DeSantis issued an executive order this week that says all visitors from the tri-state area should self isolate for 14 days.

Those pleas were echoed by top health officials in the White House.

New York had more than 46,000 confirmed cases and 603 deaths as of Saturday afternoon, most of them in New York City. Overall, there are at least 112,468 cases in the U.S. and more than 1,800 deaths, according to data tracked by Johns Hopkins University.

-A top health official in Detroit says that city could be hit harder than New York, according to The Associated Press. “At this time, the trajectory of Detroit is unfortunately even more steep than that of New York,” Dr. Teena Chopra, the Medical Director of Infection Prevention and Hospital Epidemiology at the Detroit Medical Center, said. “This is off the charts.” Chopra said Detroit has a high population of at-risk residents with underlying health conditions.

-A horse racing track in New York is being converted into a hospital.

-Cuomo pushed the state’s presidential primary from April to June.

-Rhode Island and Kansas became the latest state to announce “stay at home” orders for their residents. At least 22 states are now under such orders, although restrictions and closures vary widely.

-President Trump on Friday night signed an executive order that allows the Department of Defense to recall former servicemembers back to active duty to assist in the fight against the coronavirus pandemic, The Washington Post reported. “As this is a dynamic situation, we do not currently have a projected number of expected activations, but the Department is now fully authorized to make activations as needed,” Chief Pentagon spokesman Jonathan Rath Hoffman said in a statement. Earlier in the week, the U.S. Army had emailed retired soldiers and asked if they would be interested in returning to active duty, especially those in the medical field.

-West Virginia officials said an announcement on Friday that the state had its first COVID-19 death was not correct. The announcement was based on information from a nursing home in Morgantown, where several patients have the disease. “Last night Sundale Long Term Care reported that a resident from our facility died,” Sundale CEO Michael Hicks said in a statement. “We have since learned that this individual did not pass away, as we originally believed.” Hicks said the patient is in critical condition at a local hospital.

-Deaths have occurred in 47 states and the District of Columbia. Besides West Virginia, the other states with no reported deaths as of Saturday afternoon were Wyoming and Hawaii.

-The convention center in New Orleans is being turned into a hospital to help ease the burden on local health facilities. The city is one of the nation’s outbreak hotspots, possibly fueled by the large Mardi Gras celebrations in late February. Similar facilities in other large cities, including New York’s Javits Center and Chicago’s McCormick Place, are also being converted to hospital. The U.S. Army Corps of Engineers has assessed 114 sites in all 50 states and five territories, Lt. Gen. Todd Semonite said in a Friday news briefing. “We’ve already got contracts, and we’re cutting contracts every night to be able to get contractors to be able to come into the facilities,” Semonite told reporters.

-The Walt Disney Company announced Friday that Disney World and Disneyland would remain closed indefinitely. The parks were eyeing the end of the month to reopen after a two-week closure. “As a result of this unprecedented pandemic and in line with direction provided by health experts and government officials, Disneyland Resort and Walt Disney World Resort will remain closed until further notice,” the company said in a statement. Hourly employees will continue to be paid through April 18.

-Canadian Prime Minister Justin Trudeau said Saturday that anyone showing symptoms of COVID-19 will be barred from boarding domestic flights or intercity trains.

-Spain recorded its deadliest day since the start of the outbreak, with more than 800 deaths and 8,000 new cases, The AP reported. The country’s travel restrictions were tightened to eliminate all non-essential trips, including going to work.

-Eighty-six United Nations staff members around the world have been diagnosed with COVID-19. A U.N. spokesman said most of them are in Europe, but there are also cases among staff in Africa, Asia, the Middle East and the U.S.

-German officials say they won’t ease closures and restrictions there until at least April 20. All non-essential shops, businesses and schools are closed and public gatherings of more than two people are prohibited. Germany has more than 53,000 confirmed cases of COVID-19 and at least 399 people there have died.

-As of Saturday morning the countries with the most overall reported cases behind the U.S. were Italy, China, Spain and Germany, in that order.

For the latest coronavirus information in your county and a full list of important resources to help you make the smartest decisions regarding the disease, check out our dedicated COVID-19 page.

I certainly thank God for air-conditioning in my house, car and every public place I frequent here in Texas! I...

30 years of Hubble telescope imagesThe Orion Nebula is 1,500 light-years from Earth and is located in Orion's Belt in...

HONOLULU (KHON2) -- A stalled front north of the main Hawaiian Islands has pushed the subtropical ridge southward. The ridge's...