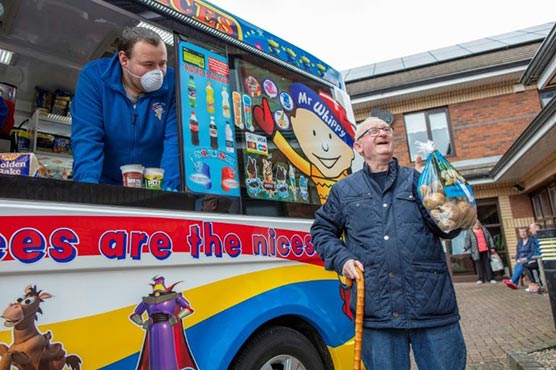 Belfast (AFP) – Ice cream vans are normally a common sight on Britain’s residential streets and in parks when warmer days arrive in the spring and summer months.

But with the country in lockdown because of the coronavirus, there are no customers to buy their cones, ice lollies and choc-ices.

In Belfast, however, at least one van is still operating — bringing essential supplies to the elderly and vulnerable forced to stay at home.

“When we had seen that the current situation was starting to arise, we knew that there would be problems for some families and elderly who cannot get access to food,” said Steven Pollock, of Greater Shankill Action for Community Transformation group.

The group asked an ice cream van owner to carry supplies to under-served areas with at-risk residents in self-isolation to avoid infection.

“The community are totally over the moon with it,” Pollock told AFP. “They’re just concerned about shops and going out in general.”

“It gives them a bit more peace of mind that it’s basically on their doorstep so they’re not leaving anything to chance.”

For the duration of the coronavirus crisis, whipped ice creams are off the menu on the side of the van as its fridges are stocked with essential foodstuffs.

Drivers still play the cheerful music, which in normal times is the sign for children to pester their parents for a sweet treat.

This year it lets the elderly and vulnerable know they will not go without potatoes, cornflakes and even hand sanitiser — essentials needed to wait out the pandemic in safety.

Some 30 people who tested positive for coronavirus have died so far in British-run Northern Ireland.

To stem the virus spreading further, the British government has advised the elderly and vulnerable to self-isolate.

“The critical thing we must do is stop the disease spreading between households,” Prime Minister Boris Johnson, who is himself recovering from COVID-19, said last week.

For the elderly and vulnerable without a support network that can create issues. Each trip to the shop becomes a gamble.

“They say it’s quite handy, especially for the older people and people with disabilities and health problems — they don’t have to travel too far,” said 21-year-old van worker Kyle Milligan.

Those on low incomes are also forced to make more frequent trips as they cannot “stockpile” like others have done, stripping supermarket shelves.

Across Northern Ireland, some 40,000 pensioners live in poverty, according to a 2018 report from charity the Joseph Rowntree Foundation.

“A lot of elderly people, or people who might not have as much, are only operating on a weekly or day-to-day basis,” Pollock said.

On Wednesday, Northern Ireland health minister Robin Swann estimated that under a “worst case scenario” 3,000 may die across the province over a 20-week epidemic.

If the crisis lasts that long, Pollock is prepared to continue and expand the project to serve other areas of Northern Ireland with more vans.

“We have been looking at ways that are long term and sustainable answers to this, so that it’s not just a quick reactionary solution,” said Pollock.

“We’re starting to see that people want it replicated throughout the country.”

HONOLULU (KHON) — Scientists in Hawaii say bright lights seen over Honolulu on Saturday night were likely the remnants of...

During a blip in time in the late Jurassic, a dinosaur that weighed no more than a chinchilla flung itself...

WATCH YOUR LANGUAGE! Words that fly to mind approached with ‘aplomb’ … or a plum

This week, I'll reveal some of the bounding unpredictable activity in my mind's recesses. Don't be afraid. I started thinking...

EMBDEN, Maine (AP) — A man with a metal detector has found a long-hidden, 222-year-old coin under a few inches...