Bay Area cooks fire up home businesses, bringing food from their kitchens to your doorstep

by admin
in Business
0

Home cooking operations are nothing new. Many people — including immigrants, stay-at-home parents and other types of entrepreneurs — have been making food in their kitchens and selling it to the public for years.

But as the coronavirus pandemic has wrought havoc on the dining industry, a new batch of impromptu food businesses is cropping up in the Bay Area as industrious former restaurant employees and home cooks deploy their skills in the kitchen to keep the bills paid.

Such pop-ups are sprouting all over the Bay Area, where residents can order roasted beet tortellini, wood-fired pizza, laksa, herb and caper focaccia or a personalized multitiered celebration cake. Some of these entrepreneurs have focused on a few specialty items, while others change their menus and themes regularly.

Scroll through your Instagram and you might come across a beautifully presented three-course meal from a Michelin-starred restaurant chef that you can have delivered to your doorstep. They might cook out of their small home kitchens or borrow restaurant kitchen space, and do all of the menu planning, order taking, packaging, social media and deliveries mostly by themselves.

And customers are literally hungry for these businesses.

“Cooks are writing to us every day saying my business is way up,” said Matt Jorgensen, director of strategy for the Cook Alliance, an Oakland nonprofit that advocates for the informal food economy. “It’s crazy they can’t do this regularly. Everyone wants to buy food right now.” 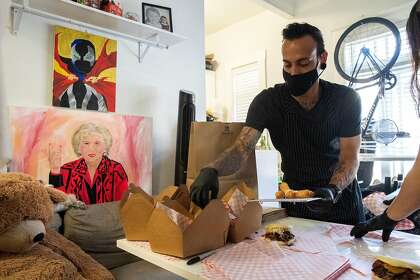 While it is legal to sell many nonperishable items prepared in your home kitchen with a permit, it isn’t yet legal in the Bay Area to sell prepared meals as many of these new home-based operations are doing.

In 2013, California passed AB1616, dubbed the Cottage Food Bill. It allows the direct sale of approved food products prepared in home kitchens based on county jurisdiction. The list includes mostly nonperishable items such as baked goods, jams and jellies, and dried fruit.

In 2018, state lawmakers passed AB626, the microenterprise home kitchen operations act that legalizes small cooking operations out of homes. Operators could earn up to $50,000 a year in revenue, and make a maximum of 30 meals a day or 60 meals a week. But one caveat is individual counties could choose to opt in and institute their own permitting and home inspection process.

AB377 was later introduced, providing clarifications of AB626 regarding county opt-in. But counties are largely not on board. So far, only Riverside County has fully legalized these operations.

In the Bay Area, Victor Aguilera is among the new pop-up pioneers. He learned how to make arepas from his grandmother when he was only 4 years old. One night in 2017, he made a big batch of the Venezuelan maize-based dish, and biked to some bars around San Francisco, selling out in less than an hour. The experience drove him to pursue his culinary career further.

Most recently he served as kitchen manager at the Brixton in Cow Hollow, but was laid off when the restaurant shuttered after the shelter-in-place order took effect. Once again, Aguilera turned to his childhood dish, launching Arepas en Bici with different varieties including pabellon criollo with shredded beef and fried plantains, and sifrina, made with shredded chicken and cheddar.

Aguilera works out of his tiny Nob Hill kitchen and also at a restaurant kitchen in Outer Sunset. He takes all orders by text. The night before a delivery, he preps the masa, cooks all the meats and mixes the sauces. The next morning Aguilera heats and assembles the arepas. His fiancee helps him pack eight to 14 orders in a large insulated container that he straps to his back, and he drops off orders by bike. Two bike couriers help with delivery on the weekends.

Aguilera sells about 25 to 50 arepas a day, and gives out 100 a week to the homeless. He charges $4-$10 for his arepas, empanadas, tequeños and pastelitos, and said he is making a profit. 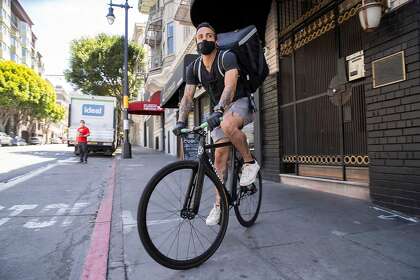 Success amid shelter in place

Oakland’s Blake Hunter spent a year and a half making hundreds of batches of bagels out of his home kitchen before perfecting his recipe. He launched Hella Bagels on March 8 as a side hustle while working full time as a district sales manager at Red Bull’s south San Francisco office. Then came the coronavirus, and he’s been selling out every week, sometimes in minutes.

“I don’t want to be the pandemic business, but it 100% helped, “he said. “Where are you going to be on a Sunday morning at this point? Not camping, not going to the park. The likelihood of you being home to receive breakfast is 100%.”

Hunter does everything on Instagram. Ordering opens at noon on Sundays the week before delivery, taken via direct messages. To keep things simple, he sells seven varieties of bagels in batches of four with a schmear. He currently works out of his home kitchen but is planning to move into a commercial kitchen soon.

Hunter begins on Friday developing the starter, then Saturday morning gets up early to mix and ferment the dough, shape the bagels and make the schmear flavors. On Sunday at 4:30 a.m., he boils and bakes the bagels.

Jackie Lee, owner of The Right Dough in Oakland, has also seen success in the past couple of months, as many people have found comfort in carbs while sheltering in place. Two years ago she left her job in the tech industry to intern at the Artisan Baking Center in Petaluma. Now she produces flavorful German-style loaves, meticulously milling her own flour and hand-kneading each loaf.

Before the pandemic, she was working in a bakery, helping a friend start her bread-making business.

“When COVID-19 hit, my husband was really concerned and said I should probably stay as safe as possible and not be around people,” Lee said. “I thought, this sucks. I have a lot of stuff to make bread with, and wanted to help people.”

She started off intending to just break even, and has since made some profit. But mostly it’s been a learning experience, and a chance to pick up more professional equipment and experiment.

Kimberly Yang was working as a psychiatrist for Kaiser Permanente and quit her job last summer to start Formosa Chocolates, making her exquisitely crafted confections from a commercial kitchen in Emeryville. She was relying on a slew of upcoming events including the San Francisco International Chocolate Salon to attract new customers and get her name out there, but those were canceled at the start of the pandemic.

“I tried to pivot towards online sales,” she said. “I created a care package with a box of chocolates and a roll of toilet paper wrapped up nicely. Those kinds of things helped me to get noticed.”

Her local sales went up with customers picking up their chocolates or ordering through DoorDash. She’s seen an uptick in orders outside the Bay Area, which forced her to figure out how to better ship an item that can easily melt. She also signed up for virtual events and training. Yang now makes 1,000 to 1,500 bonbons a week, while also doing online therapy sessions to help people during the pandemic. 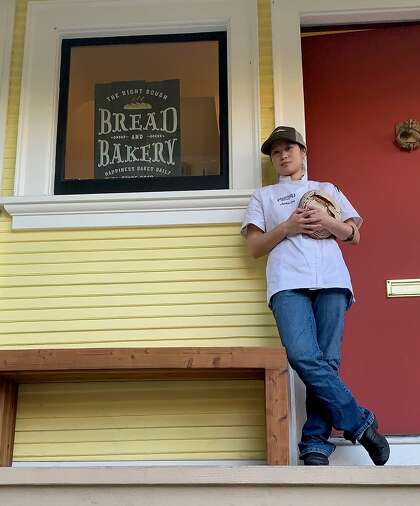 The Cook Alliance, which has more than 2,000 members, has been pushing for counties to opt in to AB377. Jorgensen said because the concept of legalizing these types of operations is so new, it is perceived as a risk for county officials and health departments. He said the perception is that they are “less controllable environments” and often it comes down to a “race and class bias.”

But Jorgensen said Riverside County so far hasn’t received any complaints about its home operations.

“I do think this influx of new people selling home-cooked food is probably here to stay,” he said. “The need for resiliency in pandemic time is also here to stay. To us, the opportunity here is this is sort of demonstrating not only a short term fix, but also what longer term recovery could look like.”

But legal uncertainty is troubling for many of these entrepreneurs. A number of operators interviewed for this story were worried they could be shut down if identified. Some still haven’t received unemployment benefits from being laid off at their restaurant jobs.

They say they are driven by a desire to keep doing what they love: experimenting with different cuisines, flexing their culinary skills and sharing their food with others.

“Me and my fiancee have been going through a really hard year and in the past couple of weeks, this has been the most positive thing I have going on right now,” Aguilera said. “I started to make moves to make everything legal for the company … so I can keep bringing to the community what I love.”

With shelter in place dragging on and the future for restaurants still unclear, cities will have to figure out what to do with these operations. Jorgensen said opting into AB377 is the most promising so far for Berkeley, which, unlike other Alameda County cities, has its own health department. The City Council is scheduled to vote on the matter June 16, and he expects it to pass. There’s even a virtual rally in anticipation of the vote on June 9.

The Board of Supervisors in Alameda County and San Francisco would be the ones to vote on the matter. 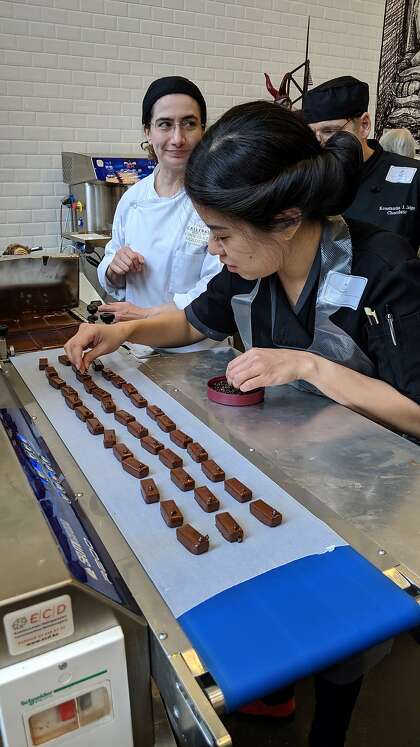 He said moving forward in San Francisco and Alameda County has been slow to gain momentum, and the pandemic has drawn many resources away from health departments, putting the cottage food expansion on hold.

Terrence Hong, supervisor for the San Francisco Department of Health food safety program, said the matter has “taken a backseat” due to the coronavirus. In San Francisco, regulation of home-cooking operations is complaint-based, and Hong said complaints are “probably zero” so far during the pandemic.

Alameda County Public Health Department spokeswoman Neetu Balram said AB377 has not come before the Board of Supervisors Health Committee for discussion, so it isn’t yet up for consideration. She said the Alameda County Department of Environmental Health has continued to address illegal operations during the pandemic and the “many complaints” registered with the department. She said operators are required to cease operations if found in violation of the law.

But Jorgensen said after discussions with Supervisor Wilma Chan, who would be the expected sponsor in Oakland, they may be willing to commit to a pilot program later this year and distribute a limited number of permits.

Some structures are in place to help home operations. They include the San Francisco nonprofit business incubator La Cocina, which focuses on helping entrepreneurs – particularly women and immigrants – find affordable commercial kitchen space.

“I know a lot of home-based businesses do struggle,” Jayaraman said. “It’s not enough to help a few individual folks start their own home businesses. We need to look at a cooperative venture that can include thousands of workers. … There is a lot it can do to provide back office support to allow businesses to grow.”

Many of these home cooks and entrepreneurs are working toward a larger goal. Lee is thinking about teaching others about artisan breadmaking. Hunter plans to turn Hella Bagels into a food truck. Aguilera wants to open a brick-and-mortar location.

SPARKS, Nev. (KOLO) - The skies have been smoky over Northern Nevada for weeks, but poor air quality is not...

“We need to follow the governor’s lead. We need to join the people, that’s what the reality is. It’s no...

Anya's Kitchen, which offers a variety of baked goods available for pickup in The Woodlands, was launched by a local...